Its great when technology works for you.  At our new home I’ve had a constant struggle of getting each room setup with wifi.  This is in addition to each room being hard wired because I’m OCD and a bit old school.  The combination of these two is pure evil in a five level split.

We live in a world where majority of the devices we use are wireless (Printer, Phones, Ipads, TV’s).  Yet for pure performance hardwire is hard to beat (PC Gaming, Console Gaming, Streaming HD Content).

As we moved into our house in 2014 the unique 5 level split floor plan destroyed my previous equipment for lack of range, especially in our most important room the office above the garage.  Far way from the base station in the basement.Over the course of 3 years I’ve experimented with repeaters, multiple routers.  Essentially a logistical nightmare, in addition to a larger 12 port router in the basement for wired connections.

This is a “part” of my technology graveyard, over $300 worth of top rated equipment that simply struggled at giving me a wireless home. 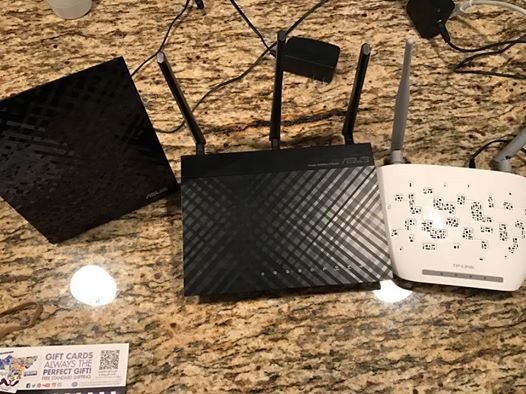 So In 2016 we started seeing the invention of “Mesh” wireless systems.  That use multiple units to broadcast a signal across your house.  This is different than multiple routers (as featured above).

Example: When I was home with my old equipment, I would need to connect to “upstairs router” when I was upstairs” and “Downstairs router” when I was downstairs.  But then for the pro’s, they’d say “name them all the same, and you wont have that problem” but then your phone for example does a shit job of disconnecting from a low signal, far away router and you get awful performance or no data.  This is also a problem for anyone that uses wireless cameras stashed all over the exterior and interior of the house.

Welcome MESH technology, and over simplified term to keep it simple.  But this kind of equipment and technology runs $500-600 when it was introduced, so being an early adopter was over rated.

Then, leave it to google to deploy a very reasonable 3 unit model at $300 (Half the price of competitors).

They even are even small and look clean!

Here is a picture example of how it functions, and its all setup using your mobile device no clunky fancy computer configuration so the whole process takes minutes and is flawless.

You’ll setup the 3 devices at different remote rooms.  Now I can see my wifi network all over the entire house, and my entire yard.  Which means I can mow the lawn and stream music over wifi. In addition to all my exterior camera’s having great signal.  Pure Bliss.