Trivia : Did you know Heman has been slaying zombies like Skeletor since 1982?  Beast.

As part of my strategy to prepare for the zombie apocalypse I’m always looking for opportunities to bulletproof our home.    Each year I tackle a new project. Some I shared earlier involve a backup sump pump, for example.  This summer I wanted to address another low hanging fruit project and explore the idea of a backup power generator.  But I wanted a cheap, yet effect way to do it.  In my very limited experience, looking into a fully automated power backup supply for the house could cost $10k+ to have professionally installed.  That kind of money isn’t worth it in my opinion because we very rarely have power outages in our development.  So I set out for a way to McGuyver the situation, yet still comply with building code.  We have to avoid introducing any kind of risk to you or your family.

Below is my shopping list and I’ll give some background as to why I picked the various components as I share how they are installed.

I wanted a backup power generator connected to my fuse box so that if we have an extended period of time with no power we can still use critical things within our house, such as lights, microwave, fridge, etc.  Basic things that will get us by with a small kiddo in the mix. 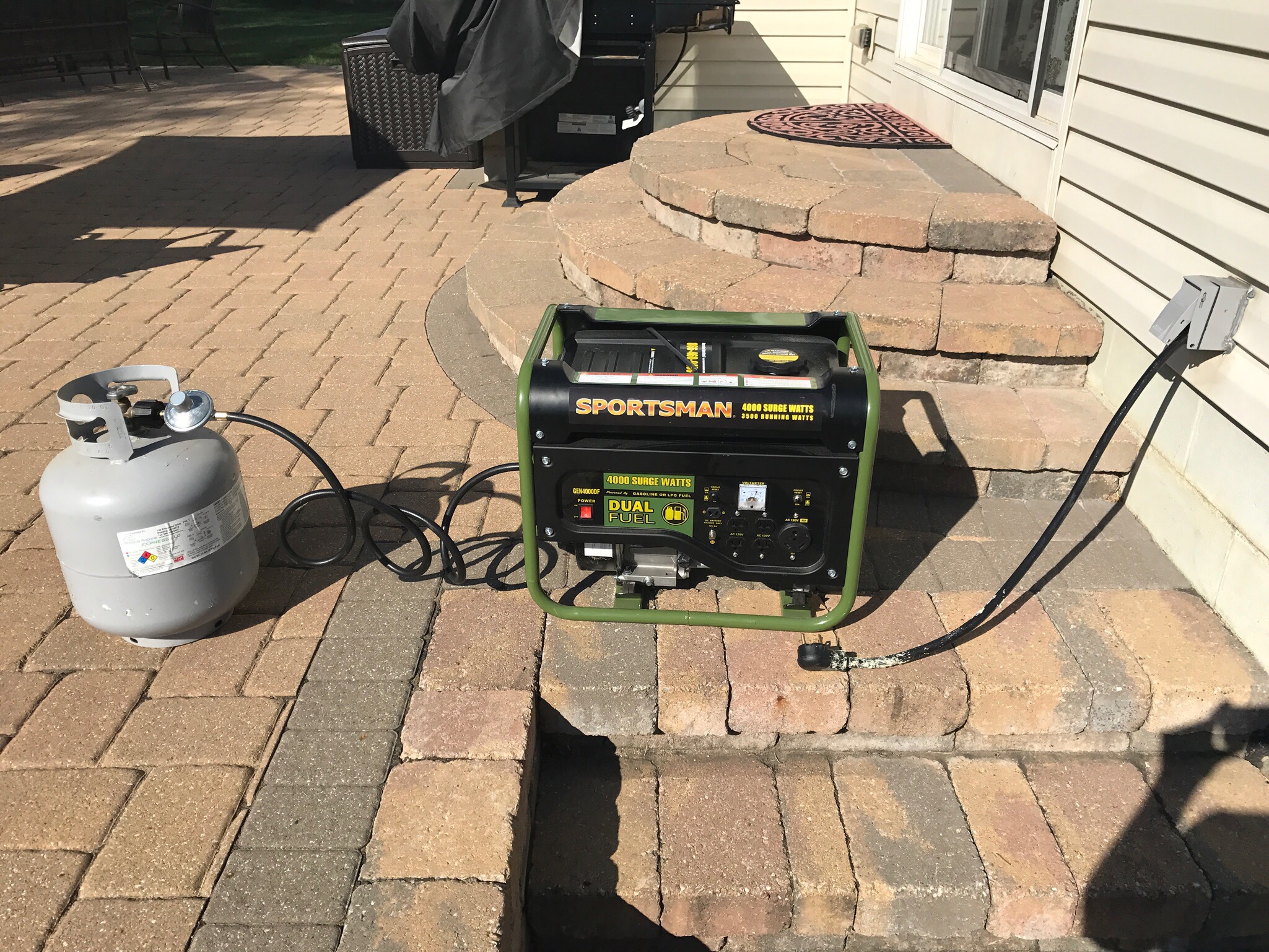 This picture is essentially my outside finished product.  I picked a dual fuel system specifically because I want to drive the generator from a propane tank.  The propane tank is a much more stable fuel source and doesn’t really go bad or spoil.  Gas has a shelf life of around 1 year if you put preservatives in the fuel.  I wanted to avoid skunked gas! This generator was the cheapest model I could find that was dual fuel with good reviews and can drive 4,000 watts.  A single propane take will last several hours, and I typically have 5-7 gallons of fuel in my garage for the mower as a backup that will last another 8-16 hours of run time.

4000 Watt Generator is enough to power a lot of small appliances, below are a few reference points to get you in the mindset.

I wouldn’t suggest going below this power rating, and you will need more if you want to also power your home air conditioner.  I use a portable air conditioner to cool a specific room in emergencies (nursery or bedroom for example).  All of the lights in my house are LED variety, so they drain very, very little power.  When calculating the size of my “ideal” generator I just added up the heavy hitter appliances.  In some cases I may need to turn off the portable AC unit to use the Microwave.

Before you get started make sure you have plenty of battery power lighting and a head lamp so your hands can be free.  Pro Tip– I used some easy peel address labels that I cut a little to modify for the fuse box so I could spend some time and re-label everything in my house in a way that makes sense to MEEEE.  We were not the original owners of my home, and one of the previous owners was an electrician so he took some creative liberties with the fuse boxes.   Once you’re ready to get started, cut the entire power to the house with your main fuse(s).  You don’t want any risk of a shock and if you have any concern around this stuff, hire a pro! 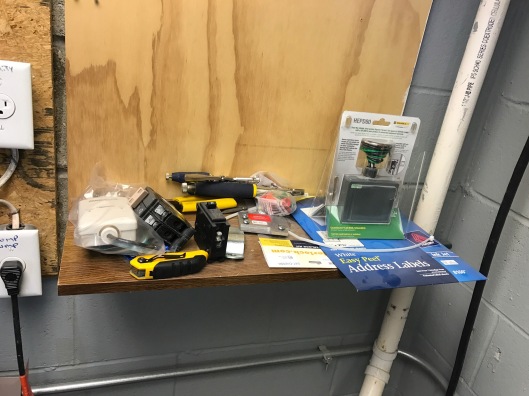 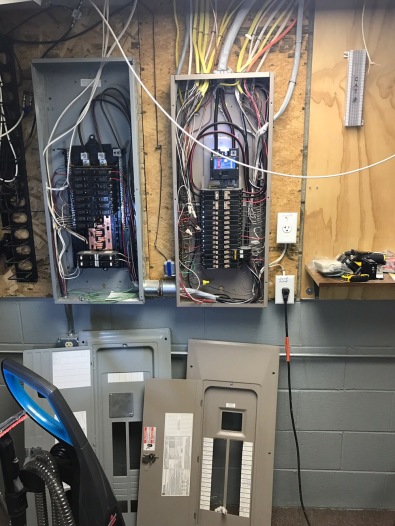 If the picture above scares you, it’s a good indication you should hire a professional for a few hundred bucks to have it done right!  Pro Tip – When you relabel your fuse box because you’re OCD like me, make sure you put a red * by the fuses you will use in an emergency situation.  This way you can easily find, and flip, ONLY those fuses for vital things that you want your generator to power.  All the other fuses will need to be flipped off.

Below is a picture of the whole house surge protector device installed (green lights mean you’re good).  I’ve had a few situations where lighting creates problems with sensitive electronics, or power going out messed up a computer, so rather then having surge protectors hooked up only to high dollar devices, I took the whole house approach.  These only recently became available and at $100 I felt it was a good investment between our computers and other sensitive electronics. 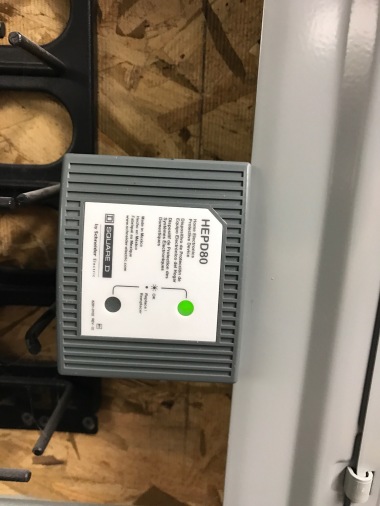 The next image is the manual switch installed.  It is a simple device and doesn’t take very long to install. However you may need to shuffle several breakers to different locations so that the top left section of your box is available.  The concept behind this device is that you cut power to your house from the power line at the street before running your generator.  That way you do not accidentally electrocute the service man working on the line for a repair (assuming a power line went down due to a storm or something). This is something you cannot take short cuts on and is required by code.  It requires you to turn off the house “breaker” before you can turn on the breaker to the power generator to feed your fuse box. 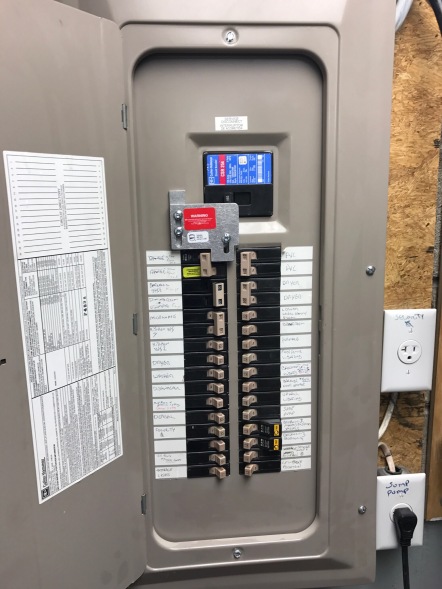 Below is the PowerBack! device.  This is an alarm that you setup at your fuse box.  And it has a cord that wraps around the power line that comes IN to your fuse box from the exterior powerline.  The alarm will go off when power has been restored to the house. This will be the indicator you use to say “Awesome, power is back. Let me turn off my generator and switch things back over.”  You only turn this device on when you’re using your generator, otherwise it remains off. 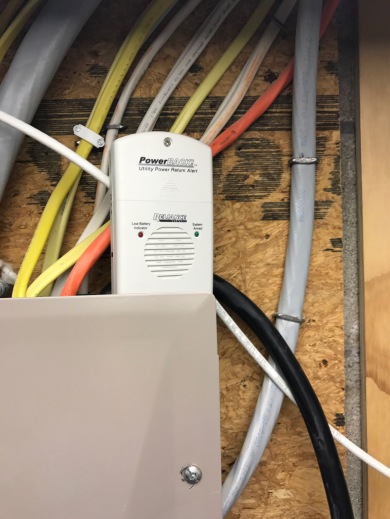 Below is my cheap and effective method for connecting my fuse box to the power generator. Its not the cleanest approach but it saved me ~$100 instead of installing a dedicated exterior box (the link I shared at the start of the article).  I chose to use 30 Ft Fuse box -> Generator Cord to directly connect my fuse box to the generator.  My generator has an RV power connector, it may vary between generators so make sure you buy the correct model plug-in (mine is rated for around 20-25 amps).  With a 30 foot cord, I have plenty of room to place the generator anywhere on my patio, or farther away from my house (due to zombies and noise, you know….). 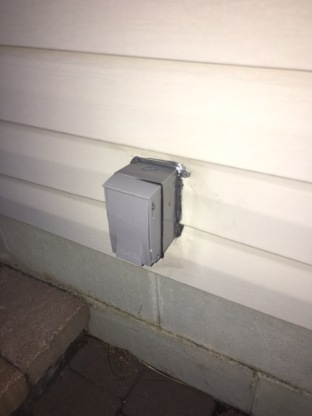 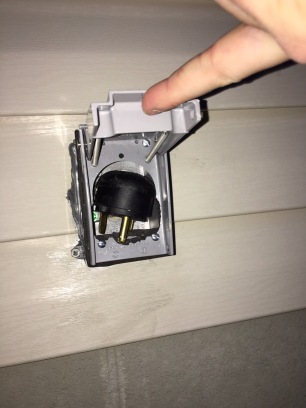 I couldn’t find a outlet with an opening large enough to house the “plug” head at my local hardware store, so I used a hole drill to make it a little bigger so that I could close the cover when not in use.  I used some exterior chalk to cover the seam connecting it to the house making it water tight.  I also used insulation on the inside such as spray foam to protect the house from the elements. You’ll see a little spray foam residue on the power line. 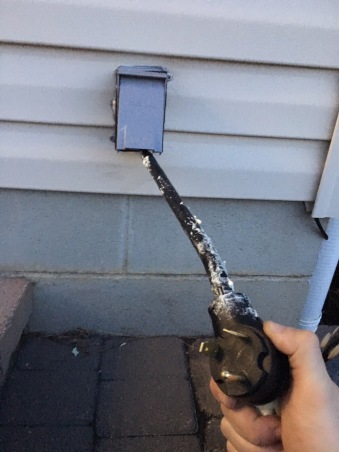 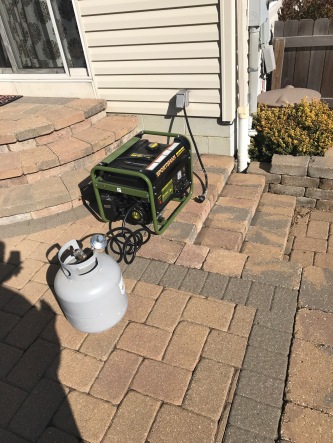 I was required to drill a hole through my wood frame to the exterior of the house for the power cord.  It was very easy to do using a spade drill bit.  Otherwise this install and setup took an afternoon and it addressed multiple concerns.

Please note, I specifically left out quite a bit of directions around working with the fuse box because I feel if you’re not very comfortable in this area you should not touch the fuse box. It is very dangerous and I’d hate for anyone to get shocked!